Going into the holiday season most people are looking forward to relaxing with family, hanging out around the fire, maybe drinking a little too much.

This holiday season, WoodWorkWIFE and I bit off too much to start with, but life handed us a buffet.  On our plate already for December was A) finishing a bathroom remodel for my Mother in Law (Check out the post here) B) a bunch of “Honey Do” items and more to get ready for our “Grinch-less Christmas Party” C) My epoxy river spalted maple barn door I have been working on forever with several setbacks. D) Oh yeah, its Christmas season…

This was a lot, but totally doable by two superheroes like WoodWorkWIFE and myself, but the universe had other plans.  At the end of the day, my to do list for December read, “surviving December,” this might become the new normal for me though.

THE SKY IS FALLING

All was well and we were chugging along on our umpteen projects until the sky literally fell, well the ceiling anyway.  One of the honey-do-list items was to fix the radiators upstairs which were not…radiating. I called out a heating specialist to come take a looks, and they did the usual once over of the system, but it has been my experience that most HVAC specialist aren’t that great with radiator systems.  Needless to say, the gentleman that checked everything out put the ole heave ho’ on a couple of the radiator valve stems which caused two leaks in the ceiling.

Fortunately, for me I had Dewalt’s two-tool kit and brushless oscillating tool in for review at the time.  I used the oscillating tool to jut down the plaster skim coat off the ceiling while minimizing the damage to the surrounding area.  This little cordless oscillating tool really packs a punch. I know there are a million oscillating tools out there and they all do basically the same thing, but a cordless oscillating multi tool is a must.  This isn’t typically a tool that you use in the shop, but rather a tool to get a smooth cut in tight spaces or cutting basically concrete off your ceiling. The DeWalt was not lacking in power and was light weight enough to operate overhead for a while without fatigue.

In today’s episode of #myoldhouse cutting a hole in my ceiling to hopefully salvage my Christmas party and repair this water damage from a leaky radiator the other day. This post is part of a partnership with @homedepot as part of the #thdprospective The cordless multi tool from @dewalttough and the cordless reciprocating saw are beasts for this task. The reciprocating saw comes in a super useful two tool set with an awesome 6 1/2″ cordless circular saw along with this cordless multi tool from #homedepot these are a PERFECT kit for the DIY master on your Christmas list. First I had to cut down the skim coat with the multi tool, then cut through lath and plaster with the recip saw and an @diablo_tools demo blade. If anyone wants to see how I patch this back up check my stories. Photo credit #woodworkwife . . . #demoday #demo #thisokdhouse #oldhouse #tools #plaster #lathandplaster #homerepair #diy #diyhomerepair #diyremodeling #remodeling #homedepot #woodworklife

After I cut down the skim coat, I had to cut out the undercoat of plaster and the water soaked lath boards.  I have a ton of the most powerful recip saws on the market right now, just by chance from either previous purchases or in for review.  The one thing that really sets the recip saw in the DeWalt two tool kit apart from its competitors (other than the fact that it comes with a cordless 6 ½” circular saw which is another super convenient tool to have around) is that it is small and light, but powerful…enough?  Does that make sense?

Engineering is about making something that just good enough for the task at hand, not making something that is as good as you can make it.  The DeWalt recip saw in this kit isn’t as powerful as the Milwaukee Sawzall I was testing at the same time, but it was more that strong enough to cut down the essentially 2 inches of concrete from my ceiling and whizzing through the lath like it wasn’t even there.  Again, the great thing about this was again using it over my head.

After I cut down the plaster patch I had to patch it and that was the hard part.  I used some plywood as backer and attached it to the back of the remaining lath then added new lath and put up new plaster…to the best of my ability anyway (which was not great.)

A HUGE OPPORTUNITY AT THE LEAST OPPORTUNE TIME

This ride has been a rollercoaster since starting my blog and my Youtube channel of ups and well more ups fortunately.  So I really want to thank all of you for reading and sharing all of my nonsense. I put a lot of thought and care into all of this, but at the end of the day I am just some dude posting stuff on the internet.  Anyways, one of my most popular series on my YouTube channel is loving called “Epic Wooden PCs” (you can find a playlist of these videos here.) and my partner on a lot of these builds has been Gigabyte. I am not sure if you wood butchers are familiar with the newfangled technology conference they have in Vegas every January the Consumer Electronics Show or CES, but Gigabyte invited me to build a PC for the show for them (Which is awesome.)


So I really want to thank all of you for reading and sharing all of my nonsense.

I jump at all opportunities, but I was a little hesitant on this one (due to the circumstances that I have laid out heretofore)  But ah yes…I remembered I had a CNC, and I could totally design something to be cut by the CNC as I worked on all of my other stuff.  I have an X-Carve from Inventables (and you totally could to, please if you buy one use my links) and I designed a build I have had floating in my head since I started building computers.  I simplified it a little bit but, I thought it would be awesome. Well, I am, let’s say “new” to CNC and tool paths and my machine isn’t as dialed in as I’d like it to be yet (at the time of starting the cuts.)  So after wasting about 50$ worth of 13 ply void free baltic birch ply, I decided to scrap that idea and cut it at the table saw.

This lovely system is headed to #CES2019 for the @aorus_official @gigabyte_official booth. Go by and check it out in person if you are in Vegas next week. @ups please be nice to this one, and GODSPEED. You messed up my last tradeshow opportunity and this one is even bigger. DM me if you want the shipping details to take special care of it. . . . #woodenpc #epicpc #pcbuild #scratchpc #gamingpc #custompc #woodworking #ces #consumerelectronics #consumerelectronicsshow #woodworker #diyer #wood #maker #makersgonnamake #makersgottamake #woodworklife #madeinstlouis

It all came out OK at zero hour, but damn was that stressful.  If there are any good pictures of the build at CES I will link to them here.

The barn door didn’t end up getting finished up but otherwise; the Christmas party was a hit, the PC made it to CES on time, the ceiling was patched, the bathroom remodel video and blog post on The Home Depot blog went Live on January 23rd…and oh yeah Christmas and New Years happened too, and everyone was happy.  After December, 2019 is going to be a breeze, and it is going to be HUGE! I look forward to sharing more with you throughout the year.

Be sure to subscribe to the mailing list to be informed when I release new blog posts, videos, or reviews.  It is going to be a busy one this year and I can’t wait to share it with you.

Remember, Keep your tools sharp, and your mind sharper,

I acknowledge that The Home Depot
is partnering with me to participate in the promotional program described above (the “Program”).
As a part of the Program, I am receiving compensation in the form of products and services, for
the purpose of promoting The Home Depot. All expressed opinions and experiences are my own
words. My post complies with the Word Of Mouth Marketing Association (WOMMA) Ethics
Code and applicable Federal Trade Commission guidelines. 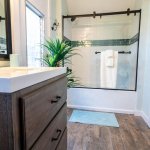 Remodeling a Bathroom for my Mother In Law for ChristmasWood Projects 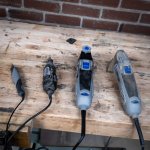