New Tools I Used in My Bathroom Remodel

I recently finished my SECOND bathroom remodel in the last 12 months…so that was a thing.  There are so many, weird and specialized tasks you tackle in doing a home renovation especially in a 100 year old house.  I had to take out an old steel tub, and a bunch of plumbing, install a new framed in alcove, it was just…a lot. These are a few of the tools that helped me survive.

When you are doing a soup to nuts remodel on a bathroom, you tear out a bunch of stuff…including lights.  I have been told it isn’t safe to operate power tools in the dark and a blank black screens don’t do very well with the YouTube algorithm.  I used the Milwaukee M12 Rocket LED Stand as a light for video and for the bathroom remodel. It performed stunningly, at 1400 lumen’s it is SUPER BRIGHT (objectively I suppose.)  I started with my actual lighting gear but I was tripping over cords and that wasn’t safe. The Milwaukee light stand was great, it ran off the Milwaukee M12 battery system and the battery life was fine, that is probably my one complaint.  The stand is stable but since the LED module on top is so small, it doesn’t need to fan out nearly as much as most standing lights (which is great if you don’t like tripping and dieing.) With adjustable height and 360 degree horizontal and vertical angle adjustments this light is super versatile.  Now I just need to make a soft box for it so I can use it for even more video.

Up to this point I have been all about the all metal tapes, until I had to actually bring one into a remodel like this one.  My favorite tape as a furniture maker which I have recently been burnt on finding out it was out ⅛” over 3 ft was the Stanley 16 ft lever lock tape.  BUT…it broke and became a prison shank on the first day of this remodel.

Current tape situation…no redundancy…need an airlift… The @officialstanleytools leverlock has long been my go-to tape but this one is out a 16th over 3ft and now this happens. Did something change? . . . #toolfail #stanleyleverlock #stanley #fail #redundancy #resiliency #woodworking #framing #woodworker #framer #woodworklife

The Milwaukee STUD was waiting in the wings, and boy did it deliver. The composite tape blade has a 10ft standoff which is perfect for, well anything really.  The blade is nice and flexible for measuring inside dimensions, and comparing it to my laser measure (which I have determined is the most accurate measuring device I currently own) it was more than accurate enough for DIY work. I wish they made this thing in a 10-15ft (They do, and I NEED it) model in a smaller form factors because for most of my work 25ft is a bit much.  I would rather be able to fit it into my pocket (I guess I will have to try the 16 ft version.) I do wish this tape had an auto-lock, but it does have a little finger hole (???) to stop the tape manually without engaging the lock. So far so good.

When doing any demo, you obviously need a reciprocating saw.  I had the MEGAMax available to me as well, but I really wanted to try out an actual Sawzall.  Milwaukee practically invented these things, or at least got the marketing right. The term Sawzall has become synonymous with reciprocating saw and I had never had my hands on one up to this point.  I have to admit, this is one of the first truly commercial grade reciprocating saws I have ever handled, but the differences were obvious. I hooked it up with Diablo’s carbide tipped Demo Demon blades and this saw whizzed through anything.  The closest thing I have handled to a saw of this power so far was the Ridgid Octane reciprocating saw and this thing was even more powerful. I liked that the weight was balanced to the center of the tool in a way that seriously reduced vibration, even with the orbital action on.  I also like the larger body for more comfortable hand positions, but it did cause some issues getting into tight spaces. With the Milwaukee 12ah battery, I didn’t need to change the battery during the entire 3 days of bathroom demolition, with plenty to spare. I can imagine this thing having plenty of juice for a day of medium use.  I was a little put off by the weight of this thing at over 12 pounds, but it was the most powerful reciprocating saw I have ever handled corded or otherwise so…take that with a grain of salt.

I mean…they were just gloves right…That is how they started but these are the first gloves that actually made it into my regular PPE.  Usually I just grab whatever is closest, but these things made it into the drawer next to my RZ mask and safety glasses. I like that it has a grip assist on the wrist (you would be surprised how often you rest things on your wrist.) they are also very breathable and flexible, it doesn’t feel like you hands are trapped in a sauna…Two thumbs up!

One of the hardest parts of this project was framing a square and plum alcove to install the Delta Upstile system in a 120 year old house with a sagging roof line.  I used all the (friggin’) lasers to figure out exactly how much the roof was sagging and how out of square the room was. I also use the laser measure to figure out how long each stuff needed to be prior to cutting, with great results.  No 2 cuts were the same, but the lasers certainly helped for layout and were a great replacement for a chalk line and a plumb bob. The red laser was plenty bright and visible for this application, but I imagine a green or blue laser might be more visible against wood or in bright daylight.  Like I said in a previous article, I could totally see these replacing traditional analog measuring tools. I just wish they had rechargeable lithium batteries.

I used the MEGAMax on my other bathroom remodel earlier in the year to rip out some wall tile and it was awesome.  I used the SDS hammer again on this bathroom remodel and it was awesome again. One totally overlooked feature I totally overlooked during the last remodel was the ability to attach the head in multiple different configurations.  This was great for getting really low angles to rip up the large floor tiles, and subfloor. Battery life was way better than expected…again, and again I’ll say, “This would be an AWESOME tool for plumbers and electricians.” I wonder if anyone in the field is using this instead of the three tools it replaces with any success…Plumbers…Electricians?  You out there? Let me know in the comments.

I acknowledge that The Home Depot
is partnering with me to participate in the promotional program described above (the “Program”).
As a part of the Program, I am receiving compensation in the form of products and services, for
the purpose of promoting The Home Depot. All expressed opinions and experiences are my own
words. My post complies with the Word Of Mouth Marketing Association (WOMMA) Ethics
Code and applicable Federal Trade Commission guidelines. 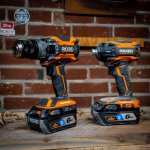 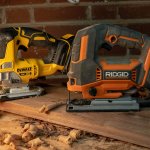