To Brush or not to Brush, is it a Question?

All carpenters, woodworker, tradesman, hel even homeowners and hobbyists have a few best friends that get them through the day.  First off, and most importantly there is coffee.

Coffee (I take mine black) is a must regardless of your skill level.  Have you ever tried to do anything before your first cup of joe in the morning, it violates almost every OSHA law on the books.

Second is a good tool belt, this encompasses a lot of tools that vary trade to trade, project to project.  The tool belt doesn’t have to be expensive or fancy(but damn it is nice when they are) but it has to be yours, you’re not going to touch a man’s grill or wear another man’s underwear, why would you wear their toolbelt.  They don’t  have to be expensive, you could make your own, you could strap a bucket over your shoulder if you had to.  Equally important to what is in it is, knowing where all of your important tools are and having them on your person is key to frustration free projects.

Finally is a drill and driver set, wars have been fought over Dewalt vs. Milwaukee, Makita vs. Bosch.  These affiliations run deep with some folks, I think the Hatfields were a Milwaukee family.  Prices, features, lore, personal experiences, some people spend less time shopping for a car than a drill.

In my experience they all accomplish the same basic  goal with relatively similar features so what is the makeup of this great divide.  Of course you have TTi Techtronic Industries(Milwaukee,Ryobi, and Ridgid/Craftsman for Emerson/Home Depot) Stanley (Dewalt, Porter Cable, Black & Decker,) Bosch,  Makita, Hilti and Hitachi in no particular order.

I have preferences amongst these for specific tools, which I will keep to my damn self (unless you ask) but I really just needed start over with a new set.  I prefer to just buy one set and stick with the same stuff for battery powered gear, those batteries and chargers are pricey.  My old Ryobi stuff was great, I have had good experiences with Ridgid, Milwaukee, DeWalt and really all of them in all kinds of different application.  With my Ryobi’s batteries ready for replacement and the new brushless stuff coming out I had to get a new set to work on fixing and wrapping my shop in the new house.

I put my grubby paws on a lot of the new tools, and not that any of them were bad, or really had any seriously disqualifying features but I liked a couple things about the Makita drill driver combo. 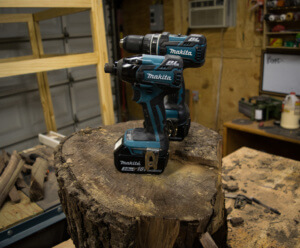 First, ergonomics, the Makita just feels really good in my hand.  I like where they put the overmolds and for my XL hands the grips are just the right size.  It sits well in my hand, feels balanced even with a 4mAh battery.  Both tools have a belt clip, which is pretty standard nowadays but still good to have.  I also really like the ease of how the battery slides in and out of the tool, the button is easy to and the locking mechanism gives you a satisfying latch.

Second, the quality of the drill.  Some entry level kits emphasize the power of the impact driver, the quality of the batteries, the double charger, anything.  They typically have one really strong feature and then everything else is disposable, and for me without the benefits of an employer to supply my tools I needed the tool itself to be great not just the accessories.  With brushless motors, the impact driver field has been really leveled.  Sure some have more/less power, ips (impacts per second,) or whatever but they can all snap the head of a deck screw.  So my research focused on the drill and the drill that comes with XT248 is about as good as they come.  With 2 speed setting, 3 modes (drill, hammer drill, and screw), ½ inch chuch, on chassis battery gauge, 16 clutch positions for finish screws, and 530 lbs of torque this drill really had everything I could ever see myself needing.

Third, XPT (Extreme Protection Technology) this isn’t huge for some, but if you are a hobbyist or a part-timer sometimes a battery gets left on the charger, for a day a, a week, a month.  I like to know the charger is looking out for temperature, overvolting, and general safety of the battery if I leave it one the charger overnight (or longer.)  The charger also has a cool hack that will let you play 8 bit Beethoven music on it if you are clever enough (insert and remove the battery quickly to sort through the ring tones or whatever you call them on a charger.)

Finally, the battery, this was the only set of drills, maybe because of how in bed with Home Depot TTi is, where you could find the drill set with various sized batteries for really the same price.  When I bought mine you could get the 3 mAh for the same price as the 2 mAh with all the other brands.  Now you can find the 4 for the same price as the 3 mAh if you shop around a bit, or save the money and just get the 3.  Replacement and larger batteries are expensive on their own so this is not a small thing.  I have found that Amazon has had the best deal on the biggest battery and unlike Ridgid and some of the other brands, the warranty is the same on Makita wherever you buy it.

I am not going to torture test these drills, but the batteries hold up great and the power is plentiful.  One of the biggest stressors on my old  drill was pocket holes.  I would be drilling along and then suddenly I wouldn’t have enough power and I would chop up the surface or have all kinds of blow out.  I could get through one cabinet, but not even close to a case.  With the XT248 I can get through a whole case, hell I could probably get through 3.  Between the brushless motor and the bigger lithium batteries I could get through a whole kitchen without changing a battery.  I never find myself reaching for my corded drill.

I don’t have anything major to point out but a few things Makita could really improve on.  It would be great if they added a magnetic bit/screw holder somewhere on either or each of the tools, I end up just poking a rare earth magnet in the belt clip to stick some screws on or hold a few bits.  Another thing, I am not sure what held them up on a battery meter on the impact driver, seems like they cheaped out on that, it would have been nice.  A metal shroud on the drill seems like it would hold up a lot better, but the plastic one does have its benefits in that if it falls over on a wood floor it won’t mar.  Lastly, it might be nice to have at least 2 speed setting on the impact driver.  The trigger is a fine control, but if you were putting in a 1000 screws on a deck or something it might be nice to just have a setting that would start them and buzz them in like some of the higher-end DeWalts do.  Since I mostly do furniture this was a compromise I was willing to make.

You can find the Makita at Home Depot, Amazon, or wherever you buy your tools.  Make sure you shop around to get the best battery for your buck.

Keep your tools sharp, and your mind sharper… 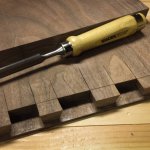 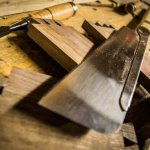 This is What it Sounds Like When Dovetails CryTool Reviews