This is not some cheapo sliding miter saw. This thing stands proud in many of the prominent maker spaces around the community.  But it looks like the DWS779 is near retirement with the new DWS709 stepping in with a deeper depth of cut, lighter weight, and better dust collection.  I had been using the Ridgid R4221 for several years now which replaced a Harbor Freight 12” saw. The HF saw was an absolute nightmare. It was time to try a different saw for a while.

Switched out my miter saw to tryout the @dewalttough miter saw. Working on a review for this thing, but before I did anything I had to check all the detents. Perfect 90s and a perfect 45, it even passes the 5 cut test for square on sliding cuts. We’ll see how I like it after a few weeks. Be on the lookout for a review on WoodWorkLIFE.com They just dropped the price if this OG saw by 50$ at @homedepot to 350, might be worth checking out. What miter saw are you running? What do you hate about it (if anything)? This post is part of a partnership with #homedepot #thdprospective #homedepotpartner . . . #newtool #mitersaw #perfectsquare #perfectmiter #tools #dewalttough #dewalt #saw #woodworkingtools #woodworking #woodworkersofinstagram #furnituremaker #cabinetmaker #woodworklife

Out of the box, the DWS779 (at least this one) came perfectly set up with all of the detents DEAD ON.  I even validated the square of the positive lock at 90 with William Ng 5 cut method and was within a thousandth of an inch. Most modern saws in the $300+ price range come pretty reliably set up, but it still makes me happy.

The bevel detents at 15, 33.5, and 45 are spot on too. It is nice when you can trust a tool like this.  The other thing, even the more expensive Ridgid didn’t have, was plum fence extensions. This may seem like a minor gripe, but when you are cutting molding, plum-ness of the fence extensions can add extra degrees to a compound bevel, which can add caulk to your work…no bueno.  So far so good.

Another gripe I had with the Ridgid was saw blade wobble.  It wasn’t enough to throw off the square or plum of a cut, but it always left the cut feeling a little less smooth than it could’ve been.  The DeWalt DWS779 has almost ZERO blade wobble. It feels very under control when using the sliding motion, making a square cut with no deviations or wiggles across the entire sliding range.

The included 32 tooth blade on the other hand, not so much.  Typically a miter saw makes crosscuts and compound cuts, neither of with a 32 tooth blade is suitable for (in non-2x4s.)  I would recommend at minimum a high quality 40-60 tooth combination blade. Or, if you are going to use it for mostly cross-cuts like me, this lovely 100 tooth fine finish blade from Diablo.

Another challenge with the DeWalt, and really any miter saw .  The mouths on these things are always enormous. I suppose this is to accommodate the full bevel and miter range of the saw.  A super easy solution to this (as long as the throat plate is inset just a little bit) is a couple pieces of painters tape over the throat plate to create a zero-clearance throat plate.  I have been using this for years and it works flawlessly as you can see. Anytime the tape gets overly “” just pull it off and slap on another couple of pieces.

Overall the DWS779 has done a great job standing the test of time but there are a few places it could improve on.  Dust collection, it does as well as any other saw of this era, but the newer saws are getting better and better at keeping that dust out of the air.  A laser or shadow line: I don’t typically trust laser lines, but the Ridgid has an LED behind the blade that produces sharp shadows exactly where the blade is going to go.  We’ll see if the new model has these features after I get my hands on one. The final thing and this seems like a bit of a safety hazard, is the torque of the saw at startup.  On the plus side, the DeWalt saw hits maximum RPM nearly immediately and also has a nice brake for slowing it down. BUT…this immediate torque causes the body to push up against your hand when you pull the trigger.  I could see this firing back a piece of wood, or shooting up into a misplaced arm in some circumstance down the road but I haven’t heard any reports.

I am going to keep the DWS779 as my daily driver for a while and see how I like it.  So far so good. It has quite a few legs up on the Ridgid. I could see myself building a new miter saw station around this new Miter saw in my new shop at the new house.  Without the blade wobble, and with the positive detents being so accurate, I trust this saw a lot more to make accurate cuts without second guesses. Someday that will probably bite me, but until then it will save a lot of time.

I guess not it is time to start designing a new miter saw station? Any ideas?

What kind of Miter saw are you running if you have one?  What are some things you wish you would’ve known about it before you bought it?

Remember, keep your tools sharp, and your mind sharper. 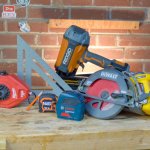 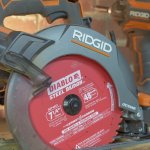