Do you need a measuring tape and a level in 2018? Bosch Blaze Laser Measure & Self Leveling Cross Line Laser Review – THDProspective Season 1

The Article below contains affiliate links 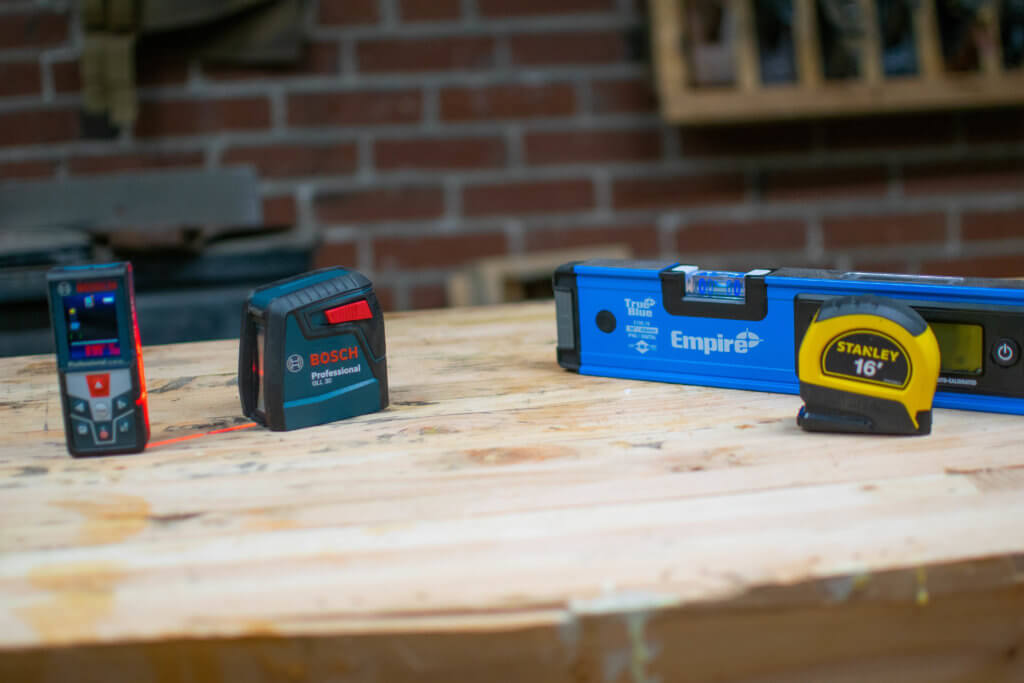 It is 2018, 3 years after George Mcfly traveled into the “future” and found the magic of a tomorrowland world with hoverboards, flying cars, and all manner of futuristic innovations.  Here we are, in the real 2018, and us wood butchers, of the carpenter, finish carpenter, or furniture maker variety, are still carrying an archaic spirit level and a measuring tape. But it’s friggin’ 2018!  There’s friggin’ lasers and technology all over the place! Is it time to hang up the level and tape and switch to lasers? 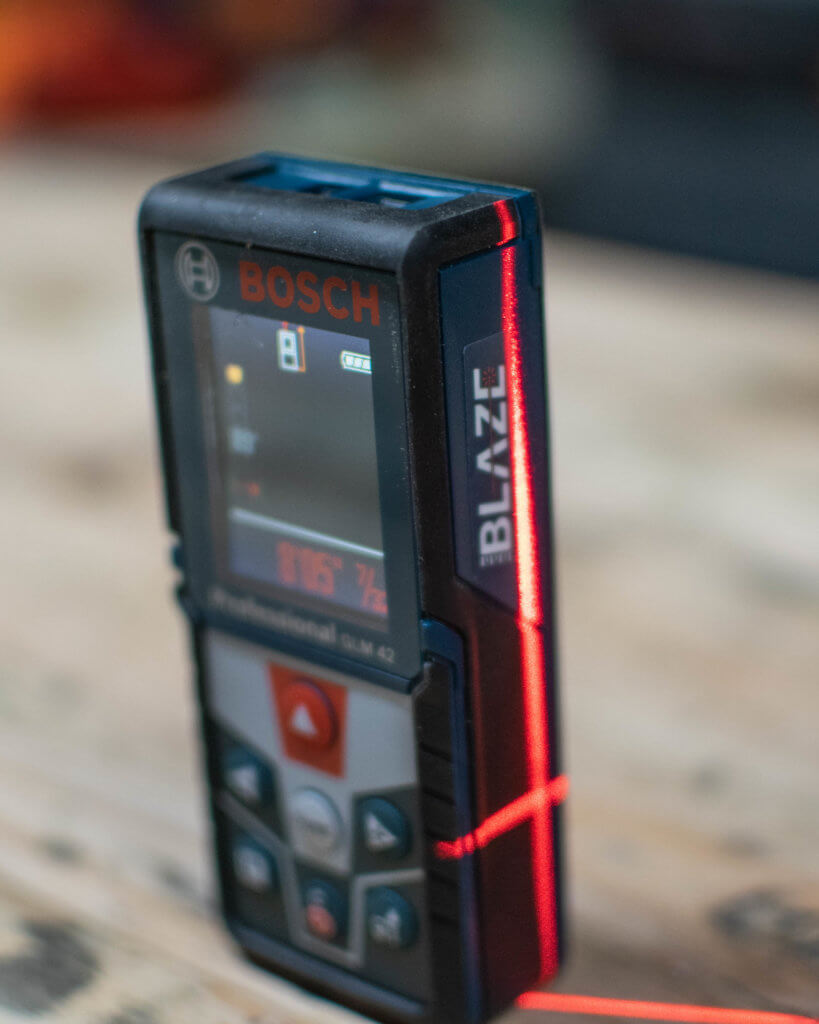 The new Bosch Blaze is more accurate, light, and useful than a classic tape measure. But can it replace one on your tool belt?

This is where Bosch comes in with a self leveling cross line laser level and precision laser measurement system come into play.  We’re finally talking friggin’ lasers here. Today I am taking a look at these two innovations in the tool world (the tech isn’t new, but the execution is refreshing!) to see if they are useful and accurate enough to use on a daily basis for common measuring tasks by comparing them with my got to Empire True Blue spirit level and Stanley Leverlock tape. 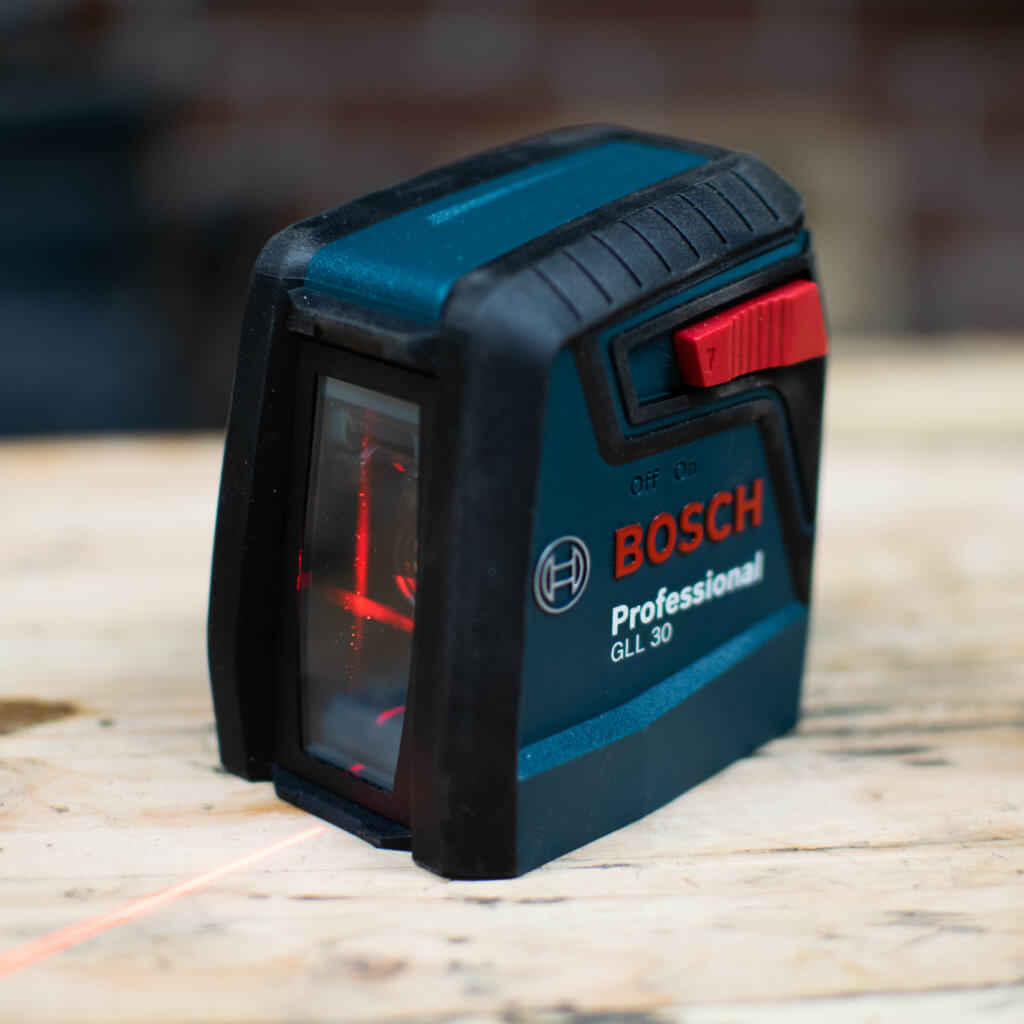 But does it keep up with the cream of the crop True Blue from Empire?

I started by comparing the accuracy of the laser to my go to tape (Stanley Lever Lock) and my go to 6ft steel rule to see how accurately they each measured a 3ft distance.  The steel rule (which I trust) and the Bosch Blaze laser were spot on! My go to tape was actually out by a 16th of an inch (well that thing is going in the trash)! In this testing I did realize one limitation of the laser, a laser can easily and accurately measure Inside dimensions (ID) of a room or a piece of furniture, but there currently isn’t a simple and reliable way to measure the Outside dimensions (OD) of an object.  This is something I will talk to Bosch about, it would be great if there were a little aluminum right angle saddle that was housed on/in the laser that could be used to measure the OD of an object reliably. Coming out of this test all I learned was to stop trusting my tape so much. 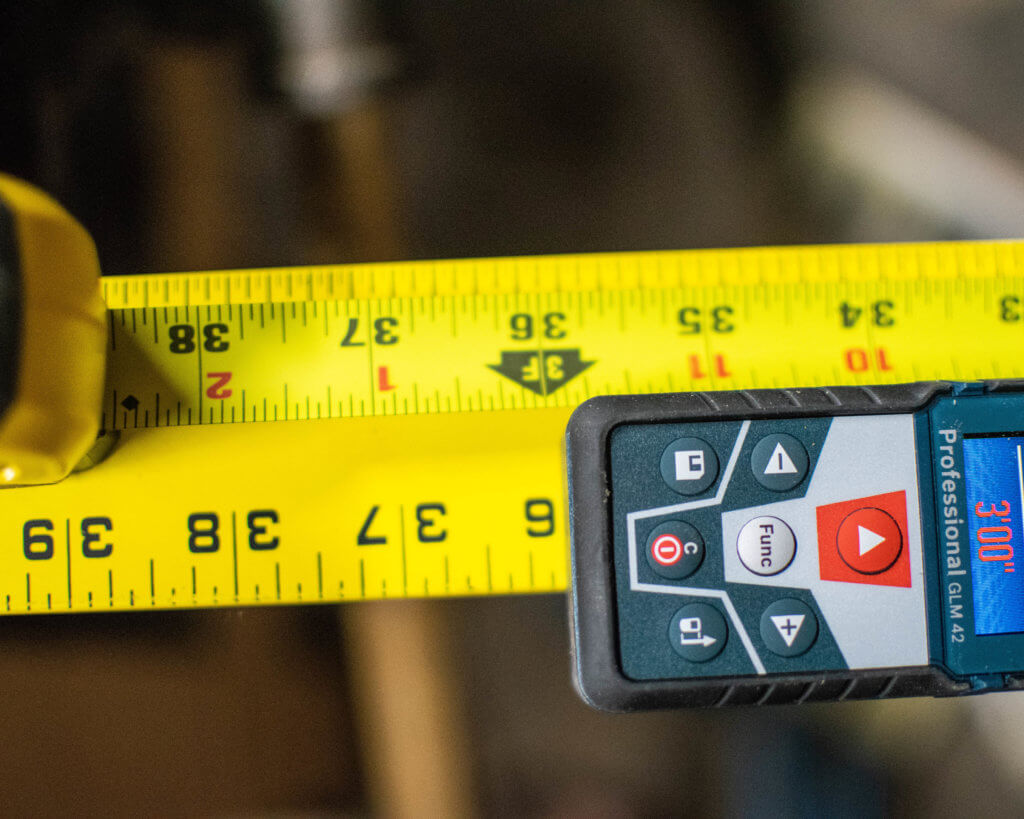 This relatively new, and once thought to be reliable Stanley lever lock is 1/16th out over just 3 ft. Do you still trust your tape? 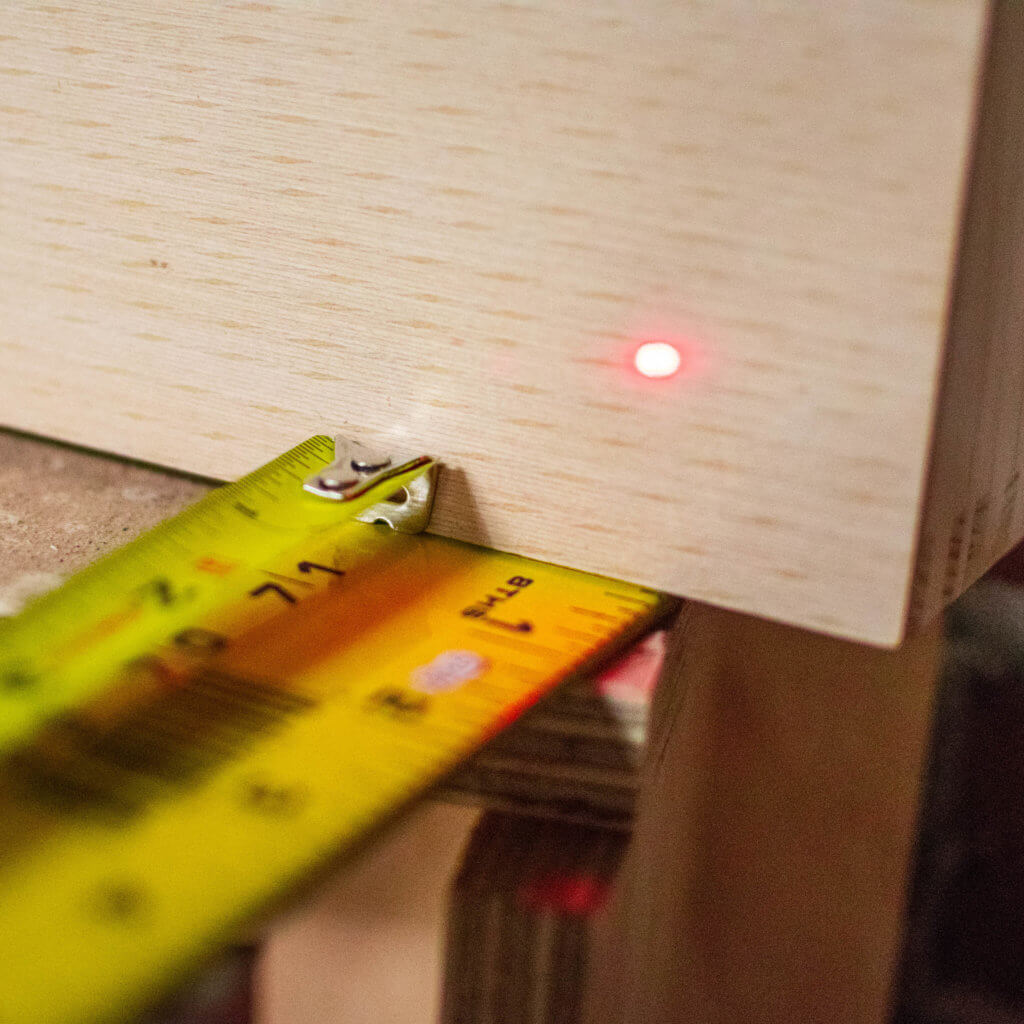 What is the error over 3ft?

Comparing the Bosch laser level with, in this case, a SWEET Empire True Blue digital level, there weren’t so much inaccuracies as just challenges with getting consistent measurements with either the physical level or the laser cross level.  First of all there is not a great way to mark a level line off a laser, but that is not particularly necessary, since the laser line is already a clearly visible mark, but I often use my level to layout reference lines. If you did need a semi permanent line or to use the level for something else you could of course snap a chalk line in the plane of the laser.  There is also something concrete about leveling to an actually physical object like a steel level, especially in the case of this Empire True Blue level that is machined to 0.0005 accuracy, this is machinist level accuracy for a carpenters level task. 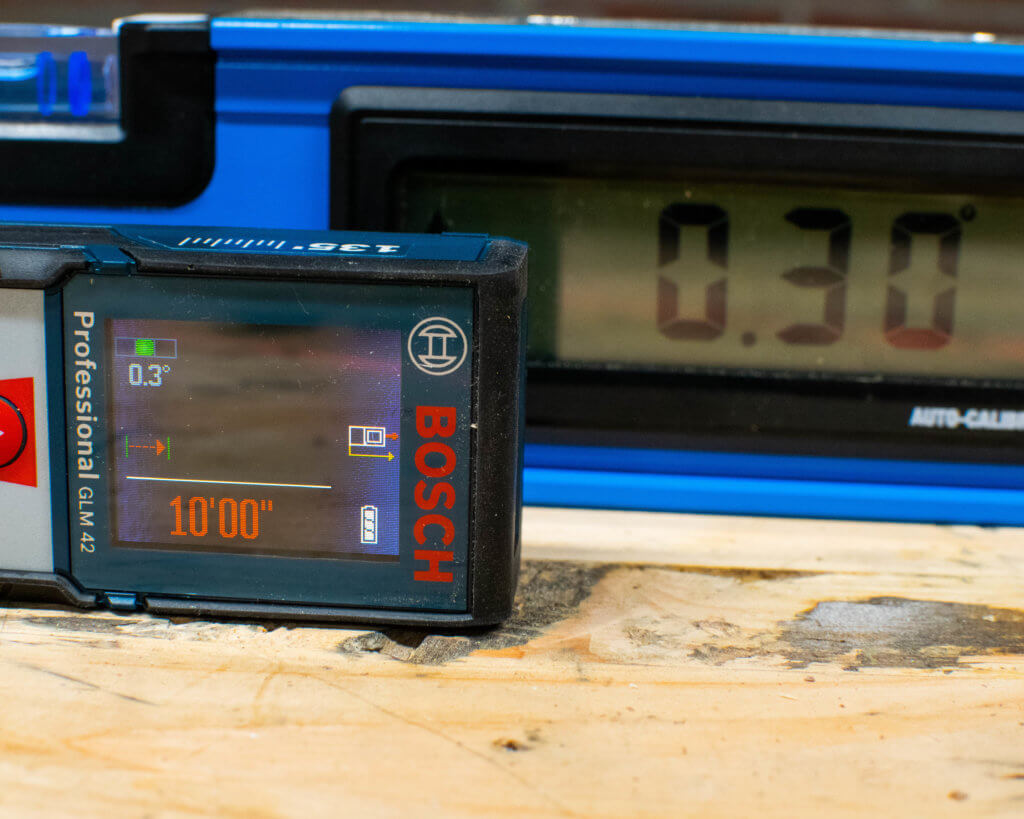 The Bosch Blaze accelerometer based level was rarely out by more than 5/100ths of a degree compared to the Empire True Blue.

Otherwise the only real challenge, is performing a task that needs to be leveled to the Nth degree with a laser.  With the Empire digital level you can nail it down to less than a tenth of a degree. I suppose you could nail level off the laser line, but it is harder to do again without that physical reference point.  If you check the self leveling laser with the physical laser (to the best of you ability anyway) the Bosch laser still nails it! The laser is just so much better at most common leveling tasks, but there is still no replacing a physical level. 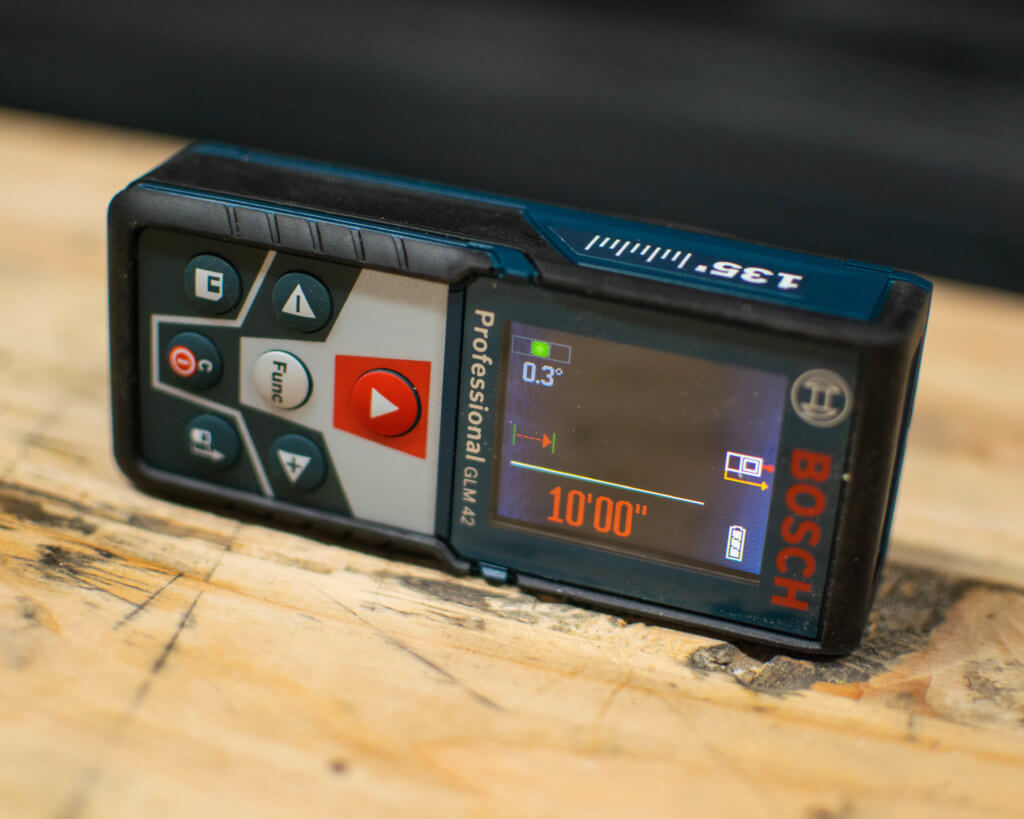 Bosch Blaze laser works exactly how you would expect it to, no instructions needed.

Ease of Use & Repeatability

Using a measuring tape, steel rule, or spirit level is just second nature to most at this point.  But how do these lasers stack up? In short…really good. With a tape there is so much room for error, you have the 1/16 error of the hook shifting between the ID vs OD positions, you have the stretch of the tape, the level and plumb of your measurement, a steel rule has similar error.  The Bosch Blaze precision laser measurement system takes all of the guesswork out of it. Not only does it show distance with a clearly visible laser dot as to what it is measuring, it also has a digital spirit level (presumably controlled by an accelerometer) that was never more that half a degree off to the Empire spirit level measurement, this way you can use this thing not only to measure distance, but also effectively as a plumb bob.  The Bosch Blaze’s error is also just 1/16th of an inch over 135ft! Vs the 1/16th error over 3 ft we see with my tape of choice. Knowing you are measuring at level and plumb also ensures accurate measurements since light can neither bend nor stretch (shut up quantum physicists!)

I am not saying to drop your tape and spirit level at the door, BUT for ID measurements the laser is really the way to go at this point…go ahead pick one up, put it on your tool belt, and tell me where your tape outperforms it.  It is lighter, more accurate, pretty damn versatile, and well just cool. A tape measure can still scribe a line, easily measure an OD, and do all kinds of useful tricks on a jobsite plus you don’t have to worry about batteries running out.

A spirit level is still indispensable and does things that a laser cross line just doesn’t do and the Empire as the name suggests is a True Blue representative of the class with more features that you could even imagine with a digital display, a precision bubble, 7 measuring modes, and an audio indicator when you hit perfect level.  A laser cross line though, does a lot more to reliably replace a chalk line and a spirit level in many applications. Also, have fun carrying around a 100’ spirit level vs a pocket sized self leveling laser.

With a few additions, like maybe an on tool (attached) saddling laser target to measure OD (for the blaze laser), a configurable horizon for the laser cross line (in case you live in a crooked 1927 built home like I do), and maybe some extra features to compute board feet, area, and other “data enrichment” that could be added now that you are capturing measurements digitally

Buy the Bosch Blaze 135ft measuring system for $99.97 from The Home Depot

Buy the Bosch 30ft cross-line laser-level for $59.97 from The Home Depot

Thanks for reading, and remember to keep your tools sharp, and your mind sharper. 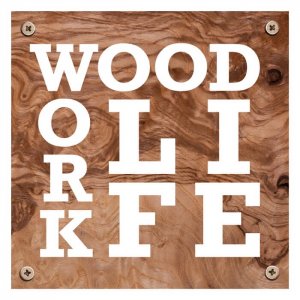 This article was written as part of a paid partnership with the Home Depot.  All impressions, opinions, and conclusions in the article above are my own. 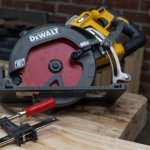 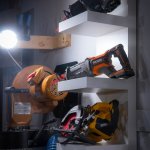